The game of Alquerque is an ancient game, the forerunner of draughts. A multitude of variants of Alquerque boards have been found indicating the existence of a whole family of Alquerque games and variations. Since it is not played today and because no definitive account of the rules is known, the following rules are conjecture based upon a partial description in the Alfonso manuscript of 1283. 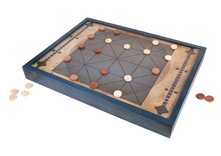 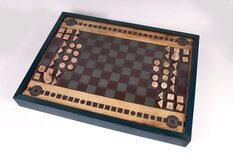 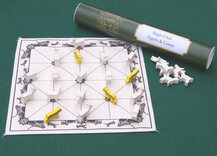 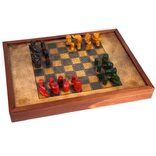 Alquerque based on the Alfonso Manuscript

The game of Alquerque is played on a special board of 5 x 5 points with lines between them to indicate allowed moves. To draw a board is easy. First draw a 5 x 5 orthogonal grid. The draw two diagonal lines - from each corner to the opposite corner. Finally draw four diagonal lines in the form of a square that connects the midpoints of each side.

Alquerque is played with 12 black pieces and 12 white pieces in a similar way to Draughts (Checkers). The pieces could be any shape but typically are counters or disks.

Toss a coin to decide who plays first. Playing first is generally thought to be disadvantageous because of the lack of options. The player playing black pieces places them on the 10 points of the nearest 2 rows plus the 2 rightmost points on the middle row as the player looks at it. The other player sets the white pieces up in exactly the same way. This leaves only the middle point without a piece upon it.

The objective of the game is to take all of the opponent's pieces or to produce a position such that the opponent is unable to move.

Players take turns to move one of their pieces. A piece may only move along the lines inscribed upon the board. For each turn a piece makes either a capturing move or an ordinary move.

An ordinary move is made by simply moving a piece along a line to an adjacent point.

A draw occurs by agreement at any point during the game. If it becomes apparent that no more pieces will be taken and both players have the same number of pieces left, a draw is agreed. Draws are very common.

To make the game more interesting, participants might like to try the following additional rules proposed by R. C. Bell in his "Board and Table Games from Many Civilisations". Primarily this adapts the compulsory capture and the "forward only" rules from Draughts.


Bell's final rule can also be played, if you can keep track: 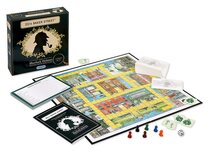 Top of page - Rules of Alquerque