The Rules of Merels or Nine Mens Morris

The Rules of Merels or Nine Mens Morris

Nine Men's Morris, also known as Merrills, Mill and Merels, is an old English game that goes back to antiquity - evidence has been found for the game in ancient Rome and possibly Ancient Egypt. More recently, references in the works of Shakespeare have given it an image of the archetypal medieval board game. Like most of the best games, Nine Mens Morris rules are simple, the objective being to capture opposing pieces by forming lines of 3. It is an under-rated game of skill that is easy to learn but sometimes requiring deep thought - a bit like grown-up tic-tac-toe (or noughts and crosses). It is an entertaining game for beginners and veterans alike and something for older children and adults to enjoy. 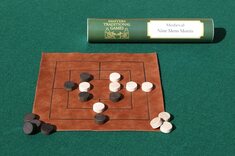 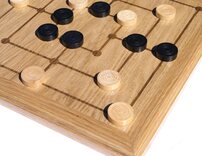 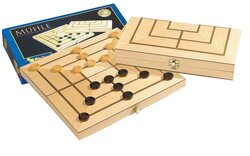 The game of Nine Mens Morris (also called Merels or Mill) is played on a board consisting of three concentric squares connected by lines from the middle of each of the inner square's sides to the middle of the corresponding outer square's side. Pieces are played on the corner points and on the points where lines intersect so there are 24 playable points. Accompanying the board, there should be 9 black pieces and 9 white pieces usually in the form of round counters.

The basic aim of Nine Mens Morris is to make "mills" - vertical or horizontal lines of three in a row. Every time this is achieved, an opponent's piece is removed, the overall objective being to reduce the number of opponent's pieces to less than three or to render the opponent unable to play. To begin with the board is empty.

Player's toss a coin to decide who will play white - white moves first and has a slight advantage as a result. Play is in two phases. To begin with, players take turns to play a piece of their own colour on any unoccupied point until all eighteen pieces have been played. After that, play continues alternately but each turn consists of a player moving one piece along a line to an adjacent point. During both of these phases, whenever a player achieves a mill, that player immediately removes from the board one piece belonging to the opponent that does not form part of a mill. If all the opponents pieces form mills then an exception is made and the player is allowed to remove any piece. It is only upon the formation of a mill that a piece is captured but a player will often break a mill by moving a piece out of it and then, in a subsequent turn, play the piece back again, thus forming a new mill and capturing another piece. Captured pieces are never replayed onto the board and remain captured for the remainder of the game. The game is finished when a player loses either by being reduced to two pieces or by being unable to move.

Sometimes a "wild" rule is played for when a player is reduced to only three pieces. In this case, any player with only three pieces remaining is allowed to move from any point to any other point on the board regardless of lines or whether the destination point is adjacent. Alternative Merels board layouts have been used over the centuries. One common pattern adds four extra diagonal lines to the basic board outlined above, the lines being drawn from the corners of the inner square to the corners of the outer square. Pieces can be moved and mills made along these extra lines in the usual way.

Top of page - The Rules of Merels or Nine Mens Morris