Senet (or Senat or Sen't) was a game played by the ancient Egyptians and is an ancestor of Backgammon. It is not known how the game was played exactly but the rules can be deduced to a certain extent and the following is a popular conjecture. 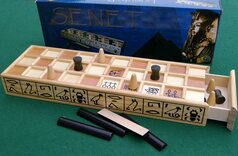 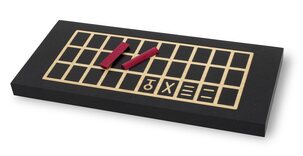 Each person has five pieces of contrasting hue or contrasting pattern. The movements of the pieces are determined by the throw of four split twigs with a dark face on one side and a light face on the other (binary lots).

Pieces are placed on the first ten squares of the first row with the colours alternating.

Players take turns to move a single piece per throw of the split twigs viz:

A square can only be occupied by one piece at a time. If no pieces can move, the turn is passed. If a piece lands on an opposing piece, the opposing piece is moved back to the square that the attacking piece started the move from.

The House of Happiness cannot be passed over. Every piece must land upon it before preceding onward. The House of water is to be avoided - when a piece lands on this square, the piece is returned to the House of Rebirth.

Pieces can only bear off the final three squares by throwing the number indicated on the square.

The first player to bear all pieces off the board wins.

Top of page - Rules of Ancient Egyptian Senet or Senat