The Rules of Croquet

The Rules of Croquet

The main set of instructions describes the International Association Croquet singles game played almost universally around the world and particularly in England, Australia, New Zealand, France, and South Africa. Rules for doubles play, the American game and the American Garden game are also given. 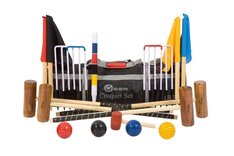 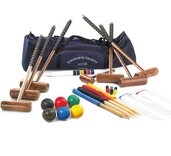 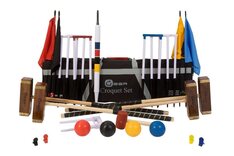 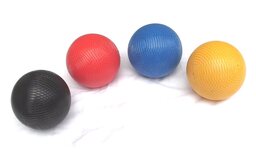 A standard croquet lawn measures 35 x 28 yards marked by a white line. The four edges are referred to as the 4 geographical compass points where South is merely the boundary facing the first hoop and having nothing to do with real magnetic orientation. The invisible line, 1 yard in from the boundary is called the yard-line, the 4 spots where the yard-lines cross are called the corner spots and the four squares delimited by these lines are called the corner squares. The stretches of the southern yard-line from the South-West corner spot to the centre and the northern yard-line from the North-East corner spot to the centre are called the baulk lines. Naturally, less formal games can be played on smaller lawns.

A basic croquet set consists of 6 hoops, 1 peg, 4 mallets and 4 balls coloured red, black, yellow and blue. Optional extra's include 4 hoop clips of matching colour to indicate the next target for each ball, a small mallet for hammering the hoops and peg into the ground, 4 corner flags and 8 corner pegs to mark the ends of the 4 yard-lines.

Each ball must go through each hoop twice in the correct order and then strike the peg. The order is as follows:

The balls then "come back" through each hoop in the reverse direction as follows:

A coin is flipped and the winner chooses a pair of balls - either black and blue or red and yellow. The player with the blue ball goes first and next three turns are taken by playing the red, black and finally the yellow ball. Each ball starts by being placed on either baulk line from whence it is struck with the mallet into the field of play.

A seasoned Croquet player taking the first shot will normally strike the blue ball to an area of lawn near enough to tempt the opponent to try to hit the blue ball with the red but far enough away so that the red ball is likely to miss and end up within striking distance of the blue ball for the blue player's next turn. Thus, from the very first shot, the complex tactics of Croquet become apparent. Beginners need not worry about this complexity, however, as the game can be just as enjoyable when played without the conniving strategies!

After the fourth turn, each turn starts with the player deciding which of the two balls to play. The chosen ball is is played throughout that turn and the other ball is termed "the partner ball". A turn ends when a stroke does does not go through a hoop or strike another ball.

If the ball goes through the next hoop in the correct direction, the ball is said to have "run the hoop" and that player is entitled to another stroke. A ball is not deemed to have run a hoop until the entire ball has passed through the hoop. Since the hoop has a depth, it should be clear that this means that the entire ball must have passed through the front of the hoop but crucially does not need to pass completely out the other side. i.e. a straight edge placed across the front of the hoop (the side that the ball enters) should not touch the ball.

If the ball strikes another ball, this is called a "roquet". A roquet entitles the player to two extra strikes. The first extra strike is a special type of shot called a "croquet" and the second is a normal strike. To "take croquet", a player must pick up the ball and place it so that it touches the ball it came into contact with (the "roqueted ball"). The player then strikes the ball in such a way that the roqueted ball also moves. Neither ball should roll outside the boundary. Obviously, if the roqueted ball is the ball of an opponent,the aim will normally be to play in such a way that the player's own ball fares well while the opponent's ball (now called the "croqueted ball") ends up in a disadvantageous position. On the other hand, if the roqueted ball is the partner ball, the objective will be to move both balls in a helpful way.

During a turn, a player may roquet each of the other three balls only once between each hoop. After a hoop has been run or at the start of a new turn, the player may roquet all three balls again. Skilful players will roquet in such a way that the roqueted ball is knocked into a position which will make the following croquet shot easier or more advantageously positioned. A shot that knocks the roqueted ball to a significantly different position is called "a rush".

If a ball touches more than one ball during a stroke, only the first ball hit is deemed to have been roqueted. If a ball roquets another ball and then runs a hoop, only the roquet is counted and the hoop is not deemed to have been run. Continuation strokes are not cumulative so, for instance, if a croquet causes the player's ball to roquet another ball, play continues with another croquet followed by one continuation stroke.

A player can knock another ball through a hoop or onto the peg and if the hoop or peg is the next target for that ball, it counts. Players's will sometimes try to deliberately do this to their partner ball. Experienced players sometimes manage to finish a game by using their turn to run their played ball and their partner ball through the last couple of hoops and peg out.

A turn therefore consists of strikes that often result in additional strokes and croquets and this allows a player to continue a turn indefinitely so that players often run several hoops in one turn. Such a run is referred to as a "break". In this, Croquet is similar to Snooker, Billiards and Pool where the best players are the those whose shots not only achieve their immediate aim but also carefully set up the following shots. Top players regularly score an "all-round break" by running all 12 hoops in one turn and really skilful people can also manage to cause their partner ball to run several hoops during the course of such a feat!


Running out of court and behind the yard lines.

Once a ball has gone through the final, "rover", hoop, the ball is a "rover". It is usually best not to peg out immediately but to leave the ball "roving" so that it can be used to assist the partner ball to finish. The game is won when both balls have pegged out. Even moderately skilful players can peg out both balls in one turn.

At the beginning of the game, each player is allocated a ball and each player can only play with their allocated ball. So for each turn, the player wielding the mallet is determined by the partnership's decision as to which ball will be played. The game is identical to singles play in all other respects.

In America and Canada, a modified game is played with slightly different terms: "hoops" are called "wickets" and a wicket is "passed" instead of "run". The court is the same size at 105 feet by 84 feet.

The game does not have baulk lines - instead balls are placed in front of the first wicket prior to their first strike, the distance from the wicket being the length of "a mallet's head".

Unlike International croquet, turns are taken in sequence - blue, red, black then yellow - throughout the entire game.

The game is more complex due to the "alive and dead" rule. As in the International game, a roqueted ball cannot be roqueted again until the player's ball has passed through it's next wicket. However, unlike the International game, balls do NOT become available to be roqueted again at the start of a new turn. A player's ball is considered to be "alive" on another ball while the other ball is available to be roqueted and "dead" once that ball has been roqueted until such time as the player's ball passes through it's next wicket. Since it's difficult to keep track of which balls are alive or dead to each of the other balls, a special "deadness board" is maintained upon which the state of each ball against the others is shown.

This is a popular family game played in the USA and Canada. The field is about 100 x 50 feet but smaller sizes are fine and often the boundaries are dictated to more by the size and shape of the garden than convention! Nine wickets and two stakes are used. The "finishing stake" is placed at the midpoint of the South boundary six feet in. Two wickets are placed north of this stake one at 6 feet towards the centre, the other a further six feet towards the centre. Sixteen further feet northwards two wickets are placed, each six feet in from either side. 16 more feet finds the central wicket placed in the exact centre of the lawn. The remaining four wickets are placed as in a mirror image of the southern half of the lawn and the "turning stake" completes the layout six feet from the Northerly border.

Play starts with a player placing the ball, a mallet's length in front of the finishing stake so that the first shot is normally to stroke the ball through the first two wickets. The game is in two halves - first a ball travels northwards through 7 wickets and hits the "turning stake". Then the ball travels southwards through 7 wickets and finishes by hitting the finishing stake. The order of the wickets in the first half is as follows - the two Southerly wickets, the South-West wicket, the Centre wicket, the North-West wicket, and finally, the two wickets in front of the turning stake. The ball returns through the two Northerly wickets, the North East wicket, the centre wicket, the South East wicket and the two Southerly wickets.

The rules are similar to the American game but without "alive or dead" rule. The returning stake counts like a wicket in most respects so that once the returning stake is hit, all three other balls can be roqueted again.

After a roquet is made, a player has two extra shots but the first of these is either a croquet or a normal shot at the player's discretion.

When a ball passes through two wickets or passes through a wicket and then hits the returning stake in one stroke, two continuation strokes are allowed. However, additional strokes are still not cumulative so, for instance, if a ball roquets another directly from a croquet or having passed through a wicket, then only the croquet and the continuation stroke from the roquet are available.

The final difference is that during a croquet, a player is allowed to put their foot on the their own ball so that it stays where it is while the croqueted ball is sent shooting into the shrubbery! 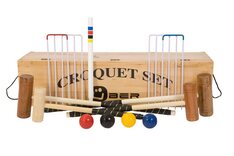 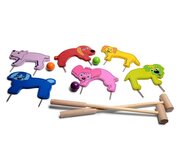 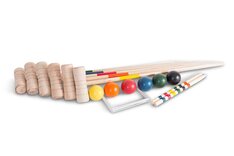 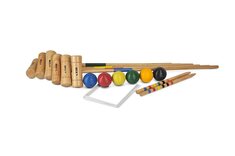 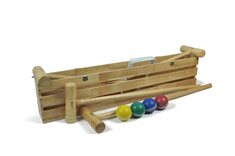 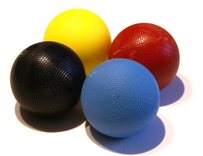 Top of page - The Rules of Croquet