Also known as Hood skittles or table skittles, Northamptonshire skittles is a marvellous classic pub game from the English midlands. The game's ancestor is old English skittles, the most venerable of all the alley skittles games, which is still played in London. This version takes up a lot less space while retaining all the excitement and skill and has been popular for decades across the counties of Derbyshire, Leicestershire, Northamptonshire, Warwickshire and Bedfordshire. 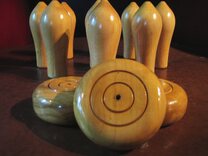 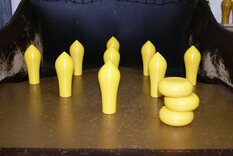 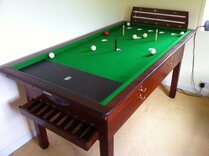 A Northamptonshire Skittles table is a complicated piece of furniture. The table surface and the walls to left, right and rear are leather bound and the walls are cushioned, whilst the rear sports a curved hood of leather or netting which stretches above the the walls in the manner of a pram - hence the alternative name of 'Hood Skittles'. At the back of the table there is often a shallow trough to catch the cheeses and fallen pins. The surface stands about 3 feet high and the thrower stands 9 feet from the front pin (measured straight from top of pin to floor) when in a pub around Leicester or Rugby, 10 feet from the front pin when playing in a Northamptonshire tavern. The skittles in the Northamptonshire variant are stout, rounded at the top, flat on the bottom and top-heavy because they are wider at the top than the bottom. In Leicestershire and Bedfordshire, the pins are shaped like West Country or Long Alley Skittles - wide in the middle and symmetrically slimmer at either end. They are 5 - 6 inches high and traditionally made of English hardwood although latterly, resins and composition materials have become more common. The cheeses are shaped like a Dutch cheese, measure about three inches across, one and a half inches high and are made of the same material.

For each turn a player throws three cheeses at the skittles which start standing in the classic diamond pattern. If all the skittles are toppled after the first or second throws, they are reset so that the maximum theoretical score in one turn is 27 points. The cushioned side walls are critical - the cheese needs to be bounced off them in order to clear the skittles in certain situations. In some places, it is also legal to bounce the cheese of the rear hood as well. In most versions, the toppled skittles are left where they lie. However, some areas in Leicestershire and Rutland remove dead skittles before each new throw. The standard singles game would consist of an agreed number of legs and would utilise the "on and off" system of scoring. This is one of those concepts that sounds much more complicated than it really is. To begin with each player starts each leg with five "lives". Each player takes a turn and the player who scores the lowest loses a life. So far so good but if the score is equal, then the next turn is worth two lives instead of one. The first life is decided by the first throw of the next turn and the second life is decided by the sum of all three throws. In this situation the score is quoted as a double number e.g. if the first throw scores 5 and the total of three throws scores 8, the score for the turn is "5 - 8". If either of these two "lives" are drawn, then the next turn is also worth two lives decided in the same way and so on. In the rare example where a two-life turn produces two draws, house rules apply but it is suggested that the next turn simply carries on in the standard two-life fashion. In the even rarer situation where both players have 1 life left and the next turn is worth 2 lives, both lives must be played out before adjusting the score. If it's a life apiece, then play continues to decide the winner.

A Daddlums table is similar to a Hood Skittles table but rather longer. There are no standards but a typical one would be 5 1/2 feet long, a couple of feet wide standing about 2 feet high. It would have wooden sides and back and the players would stand 9 feet in front of the table to throw the small cheeses at the 9 tiny pins - only 3 inches high. Players must throw the cheeses onto the front of the table so that they slide along the length of it to hit the pins.

The most popular game to play on the table is "Nines", wherein each player is allowed nine consecutive throws, the pins being reset when all are downed. The player who knocks over the most pins, wins. If a leg is tied, to decide it, each player throws just one cheese at all nine skittles. Five legs would normally be played. For doubles, each partner throws three cheeses each and the partnership who knocks over the most pins, wins. Ties are decided in the same way - one player from each partnership throwing just one cheese. 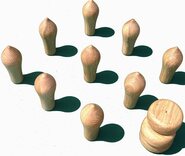