Parchís is a race game played mainly in Spain based upon the ancient Indian game of Pachisi. It is similar to Ludo from the UK, Uckers a naval form of Ludo and Parcheesi from the USA. 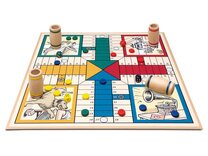 A Parchís board has a pattern on it in the shape of a cross, each arm being divided into three adjacent columns of eight spaces (squares or circles or other shapes). The middle spaces form the home column for each colour and cannot be landed upon by other colours.

Sometimes, certain spaces on the track are distinguished by a different colour or marking. These are 'safe spaces'.

The middle of the cross is the 'home' area and is usually divided into 4 home triangles, one of each colour. At each corner, separate to the main circuit are large coloured circles (or squares) where the pieces are placed at the start of the game.

Each player chooses one of the colours and places the 4 pieces of that colour in the corresponding corner area.

Players take turns in a clockwise order; highest throw of the die starts. Each turn, a single die is thrown to determine movement.

When a 5 is thrown it is compulsory for a piece to be moved from the starting corner area to the first space, if possible - and this is the only way to move a piece onto the track. Counters begin their circuit on the appropriately coloured place on the circuit adjacent to their beginning area.

If a piece lands on a piece of a different colour that is not on a safe space, the piece jumped upon is captured and returned to its starting corner area. The capturing player can then immediately move any piece on the track 20 spaces forward, if possible.

When a piece lands on the home area, another piece can immediately be moved forward 10 spaces, if possible.

If a piece occupies a safe space, a piece of another colour cannot be moved onto that space.

A throw of 6 gives another turn unless it is the 3rd six in a row.

If all 4 pieces have been moved out of the corner area, then a throw of 6 must be moved as 7, instead of 6 spaces.

If 2 of the player's pieces form a barrier when a six is thrown, one of those pieces must be moved so that the barrier is undone.

If 3 sixes are rolled in a row, on the third six, instead of a normal move, the piece moved on the previous throw of six (if any) is immediately returned to the starting corner area – unless it was on the home track in which case it is safe and is not returned.

When a piece has circumnavigated the board, it proceeds up the home column. A piece can only be moved onto the home area by an exact throw.

The first person to move all 4 pieces into the home area wins. 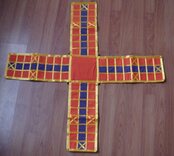 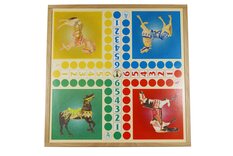 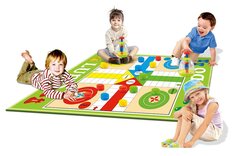 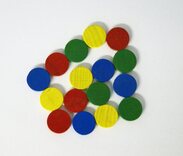 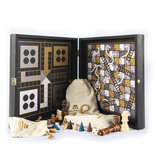 Top of page - Rules of Parchís