The Rules of Shuffleboard

The Rules of Shuffleboard

An outdoor and an indoor version of Shuffleboard exist and both rules are given together with the ancestor of both of these - Deck Shuffleboard. Masters Games supplies the rules for Sjoelbak and Indoor Shuffleboardseparately. Note: 1 yard = 3 feet = 36 inches = 0.9144 metres. 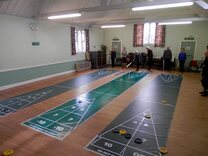 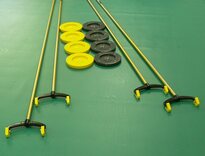 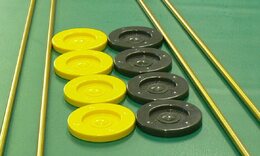 An full outdoor shuffleboard court is a long rectangle with scoring areas at either end. The full length of the court is 52 feet and the following areas are drawn from either end. A line is drawn across the court, six and a half feet from the end. This is the "baseline" and the area from the end to the baseline is called the "shooting area". From this line to the next line, one and a half feet beyond, is the "10 Off" area. The edges of the 10-off area are reduced slightly by two slanting lines at the same angle as the scoring triangle described next. The 10-off area is also split into left and right sides by a small thin triangle centrally placed. The second line forms the base of an isosceles triangle, the scoring area, the point of which is a further nine feet down the court. The triangle is divided into five areas viz: a line is drawn 3 feet from the tip and the small triangle it delineates is marked "10"; the remaining area of the scoring triangle is bisected both horizontally and vertically to form four areas. The two areas next to the 10 area are marked "8" and the two areas next to the 10 off area are marked "7". A further 3 feet from the tip of the scoring triangle is yet another line across the court known as the "dead line" - disks must cross the line in order to be counted as in play. Discs must be six inches in diameter, between nine-sixteenths and one inch thick, and normally weigh 15 ounces. Two sets of four disks in contrasting colours are used to play the game - yellow and black being the traditional shades. The cues that are used to slide the disks are in the form of a long pole with two short prongs at the end of it, just less than a disk width apart. Cues must be shorter than six and a half feet long.

The Players (or teams of two players, one at each end) take turns going first during a game. Flip a coin to decide who plays yellow and who plays black; yellow starts the first end. Players slide disks alternately. To start, the four yellow disks are placed within the right half of the 10-off area and black disks within the left side, the small thin triangle in the middle of this area dictating the middle boundary of each side. Each disk must be played with a cue and the sliding motion must start within the 10-off area and finish within the scoring triangle. If a disk does not reach the furthest dead line, it is immediately removed from play. Any disk that tips off the edge of the court is also immediately removed from play. Naturally, players will aim both to push their own disks into the scoring areas or strategically advantageous positions while also attempting to knock opponents disks out of play or into the 10-off area.

Disks that are played illegally are immediately removed from play. Any disks that that were displaced by an offending disk are also immediately removed. Any such opponent's disks are given back to the opponent to be replayed. For any disks so removed that had been lying within the 10-off area prior to the foul shot, the offender is penalised 10 points.

Scoring occurs once all eight disks have been played and is according to the areas marked on the court with 10 points being deducted for any disks in the 10-off area. A disk must be entirely within one of the five areas and not touching the outside lines of that area in order to score the amount marked within. Disks that lie beyond the 10-off area are ignored. For the purposes of scoring the penalty 10-off area, however, the small triangle that delineates the left and right halves of the 10-off area is ignored. Disks still score if they are on top of another disk. Judges should position the eye directly above any disks that are controversially positioned in order to decide whether or not a line is being touched. The game is won by the first person to reach 75 points although this cannot be achieved during a game - all eight disks of the final game must be played and the scores calculated before a player can claim victory.

A Deck Shuffleboard court typically consists of two oval scoring areas separated by a distance of 30 feet. Within each oval the middle portion is in the form of a square divided into 9 sub-squares which score from left to right 8, 1, 6, 3, 5, 7, 4, 9, 2. Notice that each diagonal or orthogonal row of 3 numbers adds up to 15 - it's a magic square. The top and the bottom edges of the square form the straight sides of two adjacent semi-circles stuck onto the top and bottom of the square to form the oval shape. The far semi-circle typically scores 10 points, while the near one typically scores -10 points (i.e. penalty points). Each oval scoring area is 6 foot from front to back. A further foot behind the far apex of each oval is the Gentleman's line. 2 feet in front of the near apex of each oval is the Ladies line. The game is played with eight wooden disks, around 6 inches in diameter which are pushed along the deck with long cues by the standing players. Each cue is a stick with a "shoe" at the far end. The shoe is a rectangular piece of wood with a semicircle cut into the far side so that it fits snugly around a disk. 4 disks are marked with one colour, the other four with a different colour.

Players toss a coin to decide who starts first (note - it is advantageous to play second) and then slide disks alternately towards the target area from behind the Gentleman's line. It is legitimate and often desirable to cause disks to knock into each other thus changing the position of one's own disks for the better or opponents disks for the worse. Any disk which does not reach the Ladies line is immediately removed from play. Once all disks have been pushed, any disks that are completely within a scoring area and not touching a line, score the value indicated. Players then start a new "end" by playing from behind the Gentleman's line at the opposite end towards the other target area. The first player to the winning total, which is usually 50 or 100 points, wins. The game lends itself to doubles with each partner playing from the same end throughout the entire game. 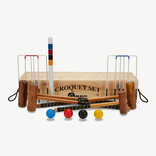 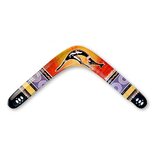 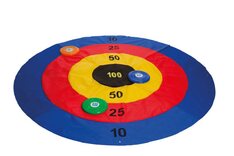 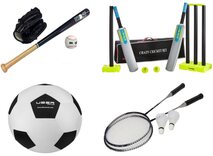 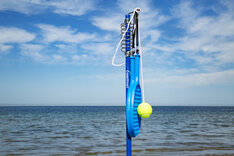 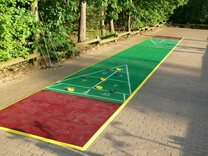 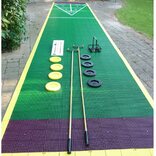 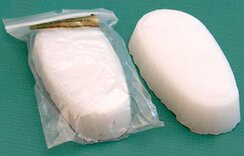 Top of page - The Rules of Shuffleboard