When it comes to choosing a Football Table, the vast range of products on offer can often be confusing and a little overwhelming. However, by taking into account your specific requirements, the choice can be narrowed down significantly. We have put together this handy Table Football buying guide to help you pick the perfect Foosball Table.

To begin with, it's worth noting that there are generally two main styles of Football Table; the 'French' table and the 'Italian' table. The differing designs and playing characteristics between the two affects the game in a number of ways. There are pros and cons to each style and ultimately it comes down to personal preference. The main differences between the two styles are outlined below. 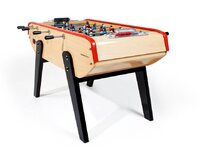 French Football Tables, like our range of Bonzini and Stella Loisirs Babyfoot Tables, typically feature a playing surface with more grip, slowing down the ball and allowing for better ball control. The ball used on French tables is also usually made of a lightweight cork, again enhancing a player's control over the ball. Players can trap the ball under the players feet and pass from side to side - skilful players can wrong-foot their opponents and manoeuvre around defenders.


All in all, the extra control offered on a French Table arguably makes the game more skilful, albeit more methodical at times. The ability to slow the ball down, pass between players and perform fakes and tricks opens up new dimensions to the game. Ultimately, skill and patient play is rewarded rather than just quick reactions and instinctive shots. 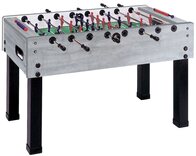 Italian tables, such as our extensive Garlando and FAS range, tend to offer a much faster game. The smoother plastic ball, coupled with the hard, slick playing surface increases the speed of play and allows for less control compared to a French table. The speed and intensity is effectively ramped up, often adding to the excitement and thrill of the games.

Italian style tables are also more widely available than the French varieties. Often this results in better value for money and a much greater choice.

Many people prefer the Italian style tables as the speed and lightning fast reactions can result in more excitement and relentless, end to end action. Passing and ball manipulation skills are still needed, but on these tables the ball rarely comes to rest and players with quick reactions and swift natural timing tend to come out on top. 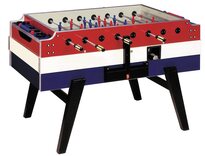 Pay-to-play Football Tables can be a great way to generate extra income for pubs, bars, clubs and other commercial venues. However, tables tend to get treated with less care and respect by boisterous punters so additional features and reinforced parts are usually required.

Football Tables fitted with reinforced glass tops are designed to protect the table from a variety of hazards, such as dust, debris and drinks falling into the table. The sealed top also prevents ball tampering, damage to the surface, rods and players, as well as stopping goal blocking and cheating. Pay-to-play tables usually also have a ball 'chute' or 'channel' than keeps the balls with the table and prevents ball loss.

Pubs and other revenue-generating entities will require a coin mechanism so that players are required to pay for each game. The coin mechanisms can be set to take different amounts allowing you to set your own price for a game. The cash is then safely stored inside a locked box within the table that only the key-holder can get to.

For further reading, Landlords or owners may be interested in the British Foosball Association Guide for Operators.

Other Factors To Consider

An important consideration to take into account is the intensity and frequency of the use of the table. If the Football Table is primarily for young children at home, a smaller children's or domestic table would be fine. For clubs and recreation rooms, a sturdier table would be needed if it's to last more than a few months. And at the top level; for pubs, bars, prisons, student common rooms, schools and public use, extremely robust tables are requisite.

Safety concerns should also be addressed, particularly for schools where telescopic bars are often a required feature. Although purists prefer standard 'through' bars, telescopic bars prevent accidents caused by bars being pushed through the table and hitting the opponent (usually not deliberately, but look out for the occasional 'dirty player'!).

Space is another consideration in some circumstances because a table can take up a fair amount of room. For domestic use, Football Tables with folding legs are often a good idea. These allow you to put the table up against a wall or in a large cupboard when not in use. However, with folding legs, robustness can often be compromised so a static table would often be the safest bet for more publicly used tables.

If you are still struggling to make up your mind, please contact us and our team of experts would be glad to help you with your decision.